How did the seventeenth-century pioneers of microscopy shape the new world that unfolded before their lenses? There was no conceptual framework for understanding protozoa, sperm or the inner anatomy of insects. But now Robert Hooke, Johannes Swammerdam and Antonie van Leeuwenhoek observed structures and creatures that previously had been beyond imagination. How did they represent their stunning observations in word and image?

Our present-day scientific practice – observing, representing, peer-review followed by publication – has its roots in the seventeenth century. The international project Visualizing the Unknown studies the origins of this process. By means of original seventeenth-century instruments and manuscripts we reconstruct and try to understand what our microscopists could actually see, and how they shaped their findings in words and illustrations. An image – since 1665 printed in the new medium of the scientific journal – could say more than a thousand words, and were instrumental in the dissemination of knowledge. However, on closer inspection, the seemingly self-evident visualizations turn out to be highly-constructed images, stressing or leaving out details. The ‘spiky blob’, soon icon for the covid-virus, is just a recent example of this longer tradition.

In 2021, an international group started the research on this them. Lead by Eric Jorink, the team includes renowned scholars of the Bibliotheca Hertziana – Max Planck Institut für Kunstgeschichte (Rome) and the Royal Society (London. Embedded by Rijksmuseum Boerhaave and the University of Cambridge, the first phase of the project consists on technical research, in our so called ‘MicroLabs’. Here, we try to reconstruct and re-enact the observations of our protagonists, by looking, drawing and taking pictures ourselves. The stunning results so far put current research on for example Swammerdam and Leeuwenhoek in a new perspective. In the second phase of our project we will zoom in on the international network of scientists; their correspondence and their publications. We explicitly include lesser known microsopists such as Marcello Malpighi, Nehemia Grew and the Huygens-brothers Christiaan and Constantijn junior.

Our project contributes to the current debates on scientific communication and scientific authority. We share our findings with a wider audience by means of presentations, publications, our website, and in the near future a YouTube-channel and a TV-series. The projects gives input to two major exhibitions as well as the NWA-project Through the lens of Antoni, also hosted by the Huygens Institute.

Fig.2. The eye of a bee seer through an original microscope as used by Swammerdam, during tijdens MicroLab 1, Rijksmuseum Boerhaave. © Wim van Egmond for Visualizing the Unknown.

Fig.3. Dissection of a silkworm, as seen through an original seventeenth-century microscope and projected on a flatscreen during MicroLab 2, Rijksmuseum Boerhaave. 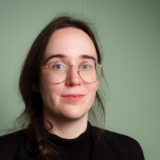