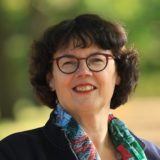 After studying history at Radboud University Nijmegen, Margit van der Steen spent ten years at Utrecht University as director of the Dutch Women’s Studies Association. On behalf of the Dutch government, she took part in the General Assembly of the United Nations in 2003 and read a statement there. As director/owner of the AETAS Agency for Age, Gender and Diversity Issues, she has worked since 2001 as an independent researcher and advisor for knowledge institutions, the national police, ministries, and civil society organisations. She gained her doctorate at Leiden University in 2011 with a dissertation about the socialist, sociologist, and feminist Hilda Verwey-Jonker.

Since 2011 she has been working at Huygens ING as coordinator of the national Political History Research School and as secretary to the International Association for Political History. She combined that part-time position with postdoc positions at Leiden University and Radboud University Nijmegen. Since 1 November 2018 she has also been a university lecturer at Leiden University. In 2020 she was made a Knight in the Order of Oranje-Nassau for her commitment to society and science.

Coordinator, Political History Research School (OPG). The OPG provides educational programmes for Holders of PhDs, strengthens (international) cooperation and is committed to improving the quality of academic research in the field of political history.