Dirk van Miert, Associate Professor of Early Modern Cultural History at Utrecht University, has been appointed the new director of the Huygens ING effective 1 October. He succeeds Lex Heerma van Voss, who is retiring.
Dirk van Miert (1974) is head of the Cultural History group at Utrecht University. He studies the early modern history of universities and scholarship. He also supervises a major project funded by the European Research Council in which digital technologies are used to shed light on the Republic of Letters, the transnational community of scholars and scientists between 1500 and 1800.
After receiving his master’s degree in Latin Language & Culture, Van Miert gained his PhD at the University of Amsterdam in 2004 for his history of the Amsterdam Athenaeum. As a postdoctoral fellow, he worked at the prestigious Warburg Institute in London on an acclaimed critical edition of the correspondence of scholar Joseph Scaliger (1540-1609). His next postdoctoral fellowship took him to Huygens ING, where he wrote a monograph on the emancipation of biblical philology in the seventeenth-century Dutch Republic. He then worked at Utrecht University, lecturing on the history of the natural sciences and humanities and on the theory of history, among other topics.
In appointing Dirk van Miert, Huygens ING is gaining an impassioned and creative interdisciplinariy scholar as its director who will be able to connect the history of politics, literature and science. He is well grounded in digital humanities but never loses sight of more traditional research methods. His expertise will prove very useful for Huygens ING’s long-term strategy of using big data, a sustainable digital infrastructure and digital technologies to better understand the interaction between cultures and identities in Dutch history.
Photograph by Dick Boetekees 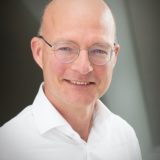