Saturday 26th of October took place, at the Utrecht Archives, the presentation of the Correspondance d’Isabelle de Charrière / Brieven van Belle van Zuylen (bilingual French and Dutch, for the moment). This happened in the context of a project currently going on at the Huygens Institute for the History of the Netherlands (KNAW), which is directed by researchers and 18th-century specialists Suzan van Dijk and Madeleine van Strien-Chardonneau.

Dutch/Swiss novelist, writer of essays and also music composer, Belle van Zuylen/Isabelle de Charrière (1740-1805) is – since 2008 – at the top of the Utrecht Literary Canon. She owes much of her reputation to her correspondence: some 2600 letters written in French. Parts of it are available in Dutch, English and Japanese translations. Now – given the interest she is generating in  many countries (Wikipedia pages in at least 25 languages) – a begin was made for online publication of her letters (transcriptions and scans of manuscript), in the original French to begin with (spelling being adapted to present-day norms). Later on translations are planned to be added.

Indeed, over the last years, a number of voluntary collaborators have been working with the digital edition tool eLaborate. Most of them members of the Belle van Zuylen Association, they contributed to preparing this publication. Using OCRd scans representing pages of the Oeuvres completes (published by Van Oorschot (1979-84)) they adapted spelling and lay-out, and added annotations.

Given the large number of letters, publication will take place in phases – to begin with this October 26 2019. Now 199 letters can be accessed: those for which the manuscripts are kept by Dutch Archives and Libraries: National Archives, Dutch National Library and Museum of Dutch Literature (in The Hague), Archives of the Province of Gelderland (Arnhem) and the Utrecht Archives.

Before the launching of the site, a symposium took place, with four speakers discussing Belle van Zuylen/Isabelle de Charrière, her personality, her writings and their importance for cultural historians, and her present-day reputation and impact – especially on women readers, themselves writers or not.

In his short introduction Kaj van Vliet (archivist at Utrecht Archives) mentioned the roles played by both Belle van Zuylen and her 17th-century predecessor Anna Maria van Schurman in the brandnew exhibition to be seen in the same building. Suzan van Dijk (projectleader) commented upon Belle’s often quoted formula: “Je n’ai pas les talents subalternes”. In Dutch this was translated as (roughly): “I have no talents for submissiveness”, and used as the title of an anthology of her letters. Van Dijk argued that those letters from Dutch collections she had now been focusing on, most of them addressing members of Belle’s Dutch aristocratic family, are not always manifesting such rebellion. Which in fact tends to make her a more interesting and more complex personality.

Kees van Strien, who had presented one week earlier his new book (in Dutch) Belle de Zuylen. A life in Holland, spoke about one of his main characters Gijsbert Jan van Hardenbroek, member of an influent Utrecht family, and several of his friends and contemporaries. Their private documents are kept at the Utrecht Archives, and had been published by Van Strien in 2005. On the basis of these letters and diaries he now presented Hardenbroek as a “victim of Cupido because of Belle”.

Dirk van Miert (leader of the SKILLNET project at Utrecht University) presented Belle van Zuylen as being a citizen of the 18th-century Republic of Letters, comparing her to Dutch female contemporaries who had been researched by his students: Hyleke Gockinga and Etta Palm. Gockinga was seen as a “second Schurman”, because of her linguistic competences. Palm corresponded with some politicians also belonging to Belle’s extended circle. Both women must have met each other in Paris, where Belle had become aware of Palm’s reputation, refering to her not by name, but as that “intrigante hollandaise”.

Then, Josephine Rombouts (successful author of Cliffrock Castle, in Dutch, relating her stay at a Scottish castle and her experience when being the housekeeper) remembered and described the very strong impression made upon her by Belle van Zuylen, when at age 19 she moved from home and started university. The very first sentences of the first letter sent by Belle to D’Hermenches, were central in her talk: their richness of contrasting feelings expressed and the need they generated for immediately acquiring this book….

Finally the website containing the digital edition Correspondance d’Isabelle de Charrière/Brieven van Belle van Zuylen: charriere.huygens.knaw.nl was presented, shown and commented. There was some insistence upon the fact that this is Work in Progress, not finished, especially as the letters contained in Dutch archives constitute a minority. Much has been done already for the letters kept in Swiss archives, but there certainly is also a possibility – for those interested in women’s writing or in French literature – to participate in this process and to join the group of voluntary collaborators. They can reach out by sending a message to one of these adresses: suzan.van.dijk@huygens.knaw.nl; madeleinevanstrien@yahoo.fr. 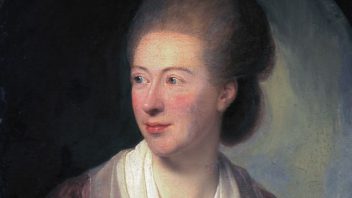 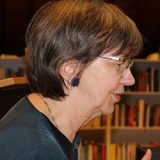