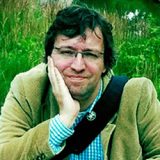 Ilja Nieuwland (1970) studied Political History and Biology at the University of Groningen and subsequently worked at the universities of Groningen and Potsdam. He has been affiliated with Huygens Institute since 2008, currently working as a web editor and researcher for the Digitaal Wetenschapshistorisch Centrum (DWC). In addition, he develops and supports initiatives in the history of science and is part of the research group for the history of science. His research focus lies on the modern history of the earth sciences and evolutionary biology.

In addition to his tasks for the DWC he wrote a thesis on the influence of Andrew Carnegie’s Diplodocus fossil on European science and popular culture in the early twentieth century under the title: The Colossal Stranger. A Cultural History of Diplodocus carnegii, 1902-1913. The book version is to appear in 2019 year with University of Pittsburgh Press under the title American Dinosaur Abroad. A Cultural History of Carnegie’s Plaster Diplodocus.

I.J.J. Nieuwland (2016). Otto Jaekel, Gustav Tornier and the use popular science as a means of leverage for the reform of paleontology in early-20th century Germany.. 14-09-2016. (Popularizing Palaeontology - Current & Historical Perspectives)
I.J.J. Nieuwland (2016). The tale of the crouching dinosaur.  How and why Dinosaurs were made in Germany around 1910. 09-07-2016. (European Association for Vertebrate Palaeontology bi-annual meeting)

Rijks, M. H.J. Zuidervaart, and I.J.J. Nieuwland The Correspondence of Dirck Rembrantsz van Nierop (1610-1682) Tools and Sources for the History of Science in the Netherlands. Den Haag: DWC. 2012.

Nieuwland, I.J.J. and H.J. Zuidervaart The Correspondence of Caspar Georg Carl Reinwardt (1773-1854). Edited by Teunis Willem van Heiningen Tools and Sources for the History of Science in the Netherlands. Den Haag: JouwBoek. 2011.