Evina Steinová (1986) is an NWO VENI postdoctoral research at Huygens ING since February 2018. Her project entitled Innovating Knowledge: Isidore’s Etymologiae in the Carolingian Period deals with the emergence of innovations in the early medieval Europe, the intellectual networks through which these innovations spread, and the role the most important encyclopaedia of the Middle Ages played as a vehicle of their dissemination and survival. She tries to answer questions such as how and why certain innovations became successful in the early medieval Europe and others not, what made some of these innovations widespread and long-lasting, while others were restricted to a limited area or short-lived, and what their pattern of spreading tell us about the intellectual infrastructure in this period.

In 2017-2018, Steinova was a Mellon Postdoctoral Fellow at the Pontifical Institute of Mediaeval Studies in Toronto, where she worked on the early transmission history of the Etymologiae of Isidore of Seville, while maintaining her affiliation with Huygens ING.

Steinova was born in Slovakia and received her first diploma in Classical and Medieval Latin at the Masaryk University in Brno, Czech Republic; her second diploma – a Research Master in Medieval Studies – was obtained at Utrecht University, The Netherlands. As a student in Utrecht, she worked on the use of the Bible in the Latin apocryphal Acts of the Apostles as part of the project ‘The Dynamics of Apocryphal Traditions in Medieval Religious Culture’ (supervised by Els Rose from Utrecht University). Her research interests include early medieval intellectual history, the history of science, digital humanities, Christian textual culture of the Late Antiquity and the early Middle Ages, and medieval Judeo-Christian relations. Since 2016, she is also a co-investigator of the Caroline Minuscule Mapping Project.

Apart from publishing in a number of outstanding journals, Steinova is also involved in scholarly communication and collaborates with several platforms, where she publishes on various aspects of pre-modern European history. 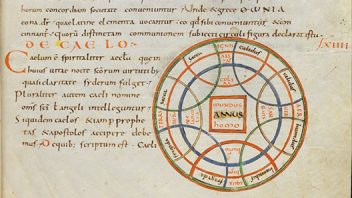 Steinova, Evina "Early medieval catechetic collections containing material from the Etymologiae and the place of Isidore of Seville in Carolingian correctio". and O'Sullivan, Sinead Arthur, Ciaran (ed.). Crafting Knowledge in the early medieval book: Practices of collecting and concealing in the Latin West. Publications of the Journal of Medieval Latin. Turnhout: Brepols Publishers. 2023.

Steinova, Evina "Nota and Require: The Oldest Western Annotation Symbols and Their Dissemination in the Early Middle Ages". and Shailor, Barbara A. Dutschke, Consuelo W. (ed.). Scribes and the Presentation of Texts (from Antiquity to c. 1550): Proceedings of the 20th Colloquium of the Comité international de paléographie latine. Bibliologia; 65. Brepols Publishers. 2021, 477-493. https://doi.org/10.1484/M.BIB-EB.5.124987

Steinova, E. "The prehistory of the Latin Acts of Peter (BHL 6663) and the Latin Acts of Paul (BHL 6575). Some observations about the development of the Virtutes apostolorum". Proceedings of the International Summer School on Christian Apocryphal Literature. Turnhout. 2014, 69-83. https://doi.org/10.1484/M.ISCAL-EO.5.102714

Steinova, E. "“All that suffering”: Hebrew narratives about the Prague Easter massacre of 1389 and their interaction with Latin material". Knaanic Language: Structure and Historical Background. Proceedings of a conference held in Prague on October 25-26. Prague: Academia. 2013, 241-268.

Steinova, Evina "The early reception history of the first book of the Etymologies as a mirror of Carolingian intellectual networks: a proposal". and Kelly, Michael Fazioli, Patrick (ed.). Social and Intellectual Networking in the Early Middle Ages. New York: punctum books. 2023, 191-235.

Steinova, E. Notam superponere studui: the use of technical signs in the early Middle Ages 2016.

Steinova, Evina and P. Boot, editors The glosses to the first book of the Etymologiae of Isidore of Seville: a digital scholarly edition 2021.